Comcast hates customers. At least, that’s been their reputation for as long as anyone can remember.

When it comes to online reviews, it seems like no one’s behind the wheel. No one seems to be managing or responding to their nightmarish reviews.

A customer service rep changed the name on Ricardo Brown’s bill to “Assh*le Brown” after he terminated his cable TV service. 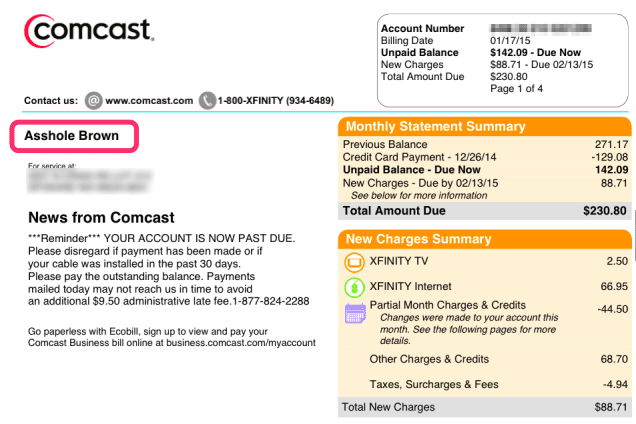 Comcast ignored Brown until the press got involved. Then, they were apologetic, offering a refund and two years of free service.

Mary Bauer’s name was changed to Super B*tch. Other customers were called names like whore and dummy.

No wonder customers believed Comcast hated them. What’s worse, David Cohen, a Comcast VP, admitted company officials were “deeply disappointed in their customer service“. Later Comcast stated that “it may take a few years before we can honestly say that a great customer experience is something we’re known for.”

Ouch. Did you catch the problem?

From the executive to individual departments (including customer service) – they’re all disconnected from the customer. Which is where things get dicey.

Comcast’s review strategy isn’t intentional. Their reviews happen to them. As a result, they have 1,200 1-star reviews on Consumer Affairs and more than 3,000 3-stars or less. They’ve been listed or mentioned as the worst company in America 21 times.

Online reviews need to be managed by…

No one… Or, anyone and everyone? Maybe it’s by one person.

When it comes to managing reviews, many organizations aren’t sure how to approach their reviews. It can be a challenge for a small business, let alone an enterprise with hundreds, even thousands, of locations. Do you hire a dedicated rep to handle and respond to reviews? Should it be a team?

It’s hard to move forward when you don’t have a plan.

Here’s the reality of online reviews. They typically need attention from more than one person, department or specialty. This little review story shows you what I mean.

I ordered leather shoes from overseas, paid for two-day shipping, and they arrived late! Two weeks later the heel started separating from the rest of the shoe after only wearing them twice!

My shoes arrived defective. Then, when I tried to get a refund, I couldn’t get a hold of anyone! My experience has been the worst! A one-star review is still too much.

So far, we’ve learned there are issues with…

These departments need to take action on the points discussed in this review. But who should take the lead with the customer? Customer service? Sales? Marketing?

You should take the lead if you’re responsible for your company’s reputation.

This works both ways.

So, the best person to manage your reviews is the person (or team) responsible for managing the perception and image of your organization.

But, who is that really?

That all depends on your organization, doesn’t it?

Some organizations rely on their marketing teams to craft and control their image; others rely on management or PR. Or founders.

The title isn’t as important as the responsibility. If you’re responsible for reviews – dealing with perception issues, responding to customer feedback – you’re on the front line. Which means you should take the lead.

But you can’t do it alone.

Healthy organizations treat customer reviews as a barometer. If your marketing team is slated to respond to reviews (positive or negative), they’ll need support.

This means you’ll need a plan. You’ll also have to divide your tasks.

Naturally, questions will crop up. Who handles what and when? Who takes the lead on what issue?

Can’t we just wing it? What’s wrong with reaching out to different departments when I need it? The problem is buy-in.

The team managing your online reviews needs autonomy and control. If they neglect to get the buy-in they need they’re far more likely to run into resistance e.g. struggles for control, conflicting instructions, petty rivalries, etc.

Creating a plan ahead of time gives you the resources, contacts and know-how you need to succeed. But, most importantly, it gives you buy-in.

So what should your plan include?

Then, once you have your plan, divide tasks by responsibility. If you’re seeing a lot of “late delivery” complaints for example, you’ll need to hold fulfillment accountable. Complaints about poor customer service? Work with customer service heads to resolve the problem.

The team that’s responsible for managing your company’s image needs to have the freedom and power to hold other departments accountable. Let’s say marketing manages reviews in your organization. They receive a complaint about a customer who received the wrong order. They should be given the power they need to approach fulfillment directly to fix the problem.

If the marketing team manages customers reviews, can’t they manage the problems that come with them?

Managing reviews on your own: A recipe for disaster

A one-person shop has to manage these details on their own. They’re responsible for everything – marketing, fulfillment, shipping, etc. But this works because they have complete autonomy.

Add more people to the mix and things get messy. Suddenly…

Trusting each team to do their jobs well keeps things running smoothly. There’s just one problem.

People in small businesses are forced to wear many hats. It’s common for the people in a small business to spend their days running from one fire to the next.

Believe it or not, that’s a good thing.

Small businesses & startups tend to provide individual workers with more autonomy and control. Your team is far more likely to trust you to get things done. But that autonomy fades as businesses grow.

Isn’t it better if one person handles everything?

It’s a great idea if that person has the autonomy and control they need to get things done. One person isn’t enough if they lack the freedom they need to act on positive reviews or resolve negative ones.

Employees at Comcast lacked the autonomy they needed to get things done. They needed to form a committee and decide on a course of action to prevent employees from hurting customers.

Comcast used the wrong strategy and it hurt their customers

Each of their departments – sales, marketing, support and finance – were disconnected from customers. Support reps were forced to swim against a never-ending sea of customer frustration and despair.

This disconnect caused a breakdown in quality, creating wave after wave of negative reviews.

This doesn’t have to be you.

Wouldn’t it be wonderful to have positive and negative reviews work in your favour? They can if your reviews and company image are managed carefully.

Give the right team the autonomy and control they need to hold others accountable; hold your team accountable, then watch as your review strategy takes off.

Len is the owner and Creative Director of Quiet City Design, a full-stack media marketing company based in Toronto, Canada. He is passionate about helping his clients leverage the internet to improve business online and offline. Those methods include website development and digital marketing as well as online review reputation management and online scheduling and appointment booking platforms for local business owners.